[introduction to the collection]: during the period of the Republic of China, when the Republic of China was just established, the coins used by the people were not unified. At that time, silver coins, copper coins and tickets were used disorderly. We are no strangers to Yuan Shikai. After Yuan Shikai took office as president, he decided to consolidate the political situation, develop the economy and unify the monetary system. In February of the third year of the Republic of China (1914), the Beiyang government promulgated the national currency regulations, which stipulated that one yuan was the standard currency for unlimited legal compensation. The original 1-yuan silver coins minted and issued by various government bureaus were exchanged and recast by the government of the Republic of China. In a period of one point, it was recognized that their value was equal to the value of 1-yuan national currency. According to this provision, in December 1914 and February 1915, one yuan coin was successively minted by the general mint and Jiangnan mint, with the head of Yuan Shikai engraved on the coin, commonly known as "Yuan head coin" or "yuan Datou". The picture of yuan Datou in the third year of the Republic of China mainly takes the head of Yuan Shikai as the main pattern of the coin. The "three years of the Republic of China" is cast above the head, and the pattern on the back forms a rice ear wreath with Jiahe pattern around the face value "one circle" of the Chinese character. Its design is wonderful, which visually highlights the power of the ruler. 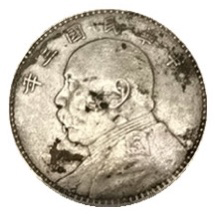 Historically, yuan Datou copper coin was designated as the national coin of the Republic of China in the third year of the Republic of China. It has changed the chaotic and inconsistent use of contemporary coins, and has very strict standards in terms of specification and quality. From the perspective of collection value, yuan Datou copper coins are relatively small, have a certain historical status, and their prices are also rising. The "yuan Datou" that can be preserved so far has become a favorite in the field of ancient coin investment and is deeply sought after by the majority of coin collectors!

In the three years of the Republic of China, yuan Datou silver yuan was so popular for the following reasons: 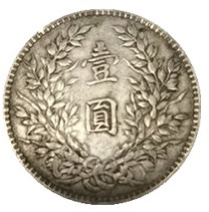 Although the coin is hundreds of years old, it is still intact today, with bright color, moderate depth and density of patterns on the coin, and vivid and natural portrait depiction. Even today, it still has high artistic appreciation value and cultural relics value, and the appreciation of its coins in the future market is unlimited.

Secondly, from the perspective of its currency: yuan Datou silver dollar represents the currency culture of the whole modern period of our country. Yuan Datou silver dollar can not only reflect the prosperity and decline of China's modern economic, diplomatic and social status, but also reflect the changes and vicissitudes of China's modern history. And at present, the number of yuan Datou silver yuan that exists among the people is decreasing day by day, especially the high-quality yuan Datou silver yuan in the three years of the Republic of China. In addition, silver itself belongs to the field of precious metals and has collection value, so its collection risk is small, which is very suitable for collectors' investment and collection